Back to all submissions

One day, while walking in the park on a dark and moonless night, one of our group members (Drew) saw a beacon of light in the distance. Curious to what was causing such brilliance, he mindlessly began to wander. He wandered towards the light. Wandered across hills. Wandered through valleys. And then he wandered right into an old Pong system. That's when it hit him! It hit him right in the head, and he passed out. When he woke back up, the beacon was gone, but he vowed from that day on to commemorate the journey with a game of Pong on an Adafruit LED display.

Our project uses an Adafruit LED strand that is wired to an Arduino. The Arduino runs a sketch that takes in serial input, and passes it to the lights. The serial communication is done with C++, where we have a program that reads data from a socket connection, and sends it to serial input. We then have a java program that connects to the C++ program with a socket, and tells it what to display. We wrote our pong game in java which sends the display via socket to our C++ program. The pong game can be connected to via smartphone browser to control the paddles.

Our goal is to put these lights on display during Christmas outside one of our houses, and let any passerby connect to the java server, and play Pong. Our target user is anyone on a Christmas light walk during Christmas time. The feature we are most proud of is the mobile phone controlled controller. 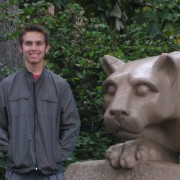 Comments for this submission are closed. View the software in WBittner's portfolio to continue the conversation.