Back to all submissions

My story: I had a spare glove, some flex sensors, an Arduino, and I don't know sign language so I went with Morse code. Quite inspiring I know.

Morse code is made up of dots and dashes, which are controlled with the flex sensors attached to the index finger and the thumb. By bending those respective fingers, it can communicate with the Arduino to represent Morse code. Don't get too excited yet.

This gadget likely has a very large number of target users given that Morse code is literally the most cutting-edge innovative communication technology available to humanity today. Not to mention the phenomenal (an impressive 2.6 words per minute) efficiency in the program due to the excitingly frustrating Arduino coding language.

I hope this revolutionary gadget will knock your socks off. Cause your socks are probably more useful than this thing anyway. 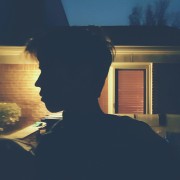 Comments for this submission are closed. View the software in mestevad's portfolio to continue the conversation.